4 Steps to Having an Honest Conversation

Home Blog 4 Steps to Having an Honest Conversation
NextPrevious

4 Steps to Having an Honest Conversation

Think back to a time when you’ve had to raise an issue with someone at work. It might be a time where you had to give constructive negative feedback to a team member, or potentially a time when you felt you weren’t being heard or misunderstood and you wanted to address it?

The truth is, we’ve all been in these situations, and let’s be real, confronting someone in the work place is never easy. Sometimes we’d probably like to stick our head in the sand and hope it all blows over. However this isn’t productive for your own personal progression or for the company at large. Always remember that no matter how awkward you might feel about confronting someone, chances are the other person feels the exact same way.

Generally, most of these situations that arise can be quite easily handled through having an honest conversation. However the challenge often lies in knowing how to frame this talk, without seeming accusatory or overly negative.

To enable you to initiate and take part in honest conversations successfully we’e put together the four-step ASCC model.

Provided you go into the conversation with the right mindset, and follow the framework below to the best of your abilities, chances are the conversation won’t be as bad as you’re imagining, and both parties should walk away feeling a sense of relief.

The key to any successful honest conversation is to acknowledge that there’s an issue, declare that you may have played a part and recognise how the other person is feeling. Like all challenging things in life, getting started and knowing what to say in an ‘awkward’ conversation is often the hardest part.

Below are some suggestions on what you could say in each scenario, to help you get the honest conversation off the ground.

If you’ve got an issue that you’d like to discuss with another person, you could start the conversation by saying something like:

“Hey, would you mind if we have a bit of a chat? There’s a couple of things that I’m not a hundred percent comfortable with and I know that I’ve played a part in it. I can see what you’re trying to achieve but I’d really love to talk it through if that’s OK.”

If the other person’s got an issue they’d like to discuss with you and you can sense it, you might start the conversation by saying:

“Hi, I’m wondering if we could stop and have a bit of a chat for a minute. I don’t think I’ve really addressed all of your concerns. I can see that maybe you’re not 100% comfortable and I’d really like to talk through it.”

If you’re in a scenario where you can see two other people may have an issue that they’d like to discuss or need to discuss, you might start the conversation by saying:

Once you’ve acknowledged there’s an issue, you can then move onto the second part of an honest conversation. Here you share all the issues, concerns, and facts from each person’s point of view, and more importantly, how those things are having an impact on how each person’s feeling.

During this phase of an honest conversation, it’s important to ensure that both people feel they’ve been genuinely heard so that everybody has a clear understanding of what needs to be resolved.

To achieve this you can ask open questions like:

After an opportunity to share, the next step in an honest conversation is to clarify some common ground and find a mutual purpose.

This is where you agree on what you both feel is important as a goal and clarify what you’re going to work towards together. You might say:

“From what we’ve both been saying, it sounds like the main area we both feel is important is ___.”

“From where I sit, it’s becoming clear that the main area of common ground and the key point where you both align appears to be ____.

After you have clarified what you will work towards, the final step in an honest conversation is to commit to specific actions, decisions or compromise.

Both people need to openly take responsibility for the things they’re agreeing to, which includes how they are going to support each other as well as hold each other accountable.

It’s really important when we commit, to give recognition and appreciation to the other person for having the honest conversation. This will enable you to end the discussion on a positive note and build trust in the relationship. 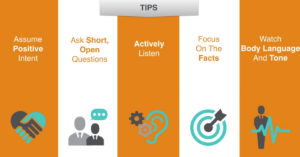 For more insights, tools and frameworks on having honest conversations in the workplace, check out this short course we put together here.