Taking the Awkwardness out of Honesty: How to Have Hard Conversations in the Workplace

Home Blog Taking the Awkwardness out of Honesty: How to Have Hard Conversations in the Workplace
NextPrevious

Taking the Awkwardness out of Honesty: How to Have Hard Conversations in the Workplace

Have you ever been in a situation where you felt like you weren’t being heard or understood by another person in the workplace?

Or perhaps you’ve felt annoyed or frustrated by somebody else or even sensed that they’ve been feeling that way towards you?

If you’re one of the lucky ones who haven’t experienced this, at some point you’ve probably at least observed an uncomfortable interaction between two people, which has led to feelings of tension and negativity in the long run.

Think back to how you felt personally when experiencing one of these situations… chances are you felt stressed, distracted and were probably more likely to behave in a more defensive or aggressive manner.

The scenarios outlined above, all commonly occur in the workplace, and if left unresolved can have a negative effect on performance and work. Often this can be easily avoided though, through open and honest communication.

However having an honest conversation isn’t always as simple as it seems, especially when there’s a level of awkwardness or hostility surrounding the situation.

But fear not, having an honest conversation with someone in the workplace is a skill, and like any skill, it can be learnt.

Identifying when to have an honest conversation

The first step to improve your ability to have constructive and honest conversations in the workplace is being able to identify when to have one.

There are three simple things that let us know that an honest conversation is needed:

In these scenarios as human beings, it’s natural to switch into survival mode because of the heightened sense of stress we’re feeling.

Our brains secrete cortisol, which is the stress hormone which kick-starts our adrenaline and activates our fight or flight behavior to protect ourselves.

If we’re not equipped to have an honest conversation, important parts of our brain will become less effective and our behaviour will be almost entirely reactive.

If we fight, we’ll be defensive, aggressive or obstructive. If we flight, we’ll withdraw and become dismissive, avoidant or arrogant – neither of which help the situation.

The aim of honest conversations is to help bring the emotions down so that you and others can move out of survival mode, act less reactively and instead be in a state where you feel you can consciously focus on having an open and constructive discussion. 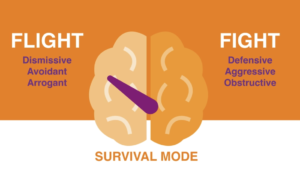 Three scenarios that call for an honest conversation

There are typically three scenarios that you’ll find yourself in, when an honest conversation is required

Scenario 1: You have an issue with someone else and you can feel your emotions rising.

Scenario 2: Someone else has an issue with you and you can sense their emotions rising.

Scenario 3: You’ve observed an issue between two others. You can sense some conflict and their emotions are rising.

In any of these scenarios, it’s essential to keep the end in mind and focus on the outcome of that conversation to ensure your emotions don’t get the best of you.

The outcomes we want from an honest conversation are really simple:

If you enter into an honest conversation with the outcome in mind, you will be far more likely to reach a resolution that pleases both people and negates any awkwardness or hostility that existed before.

The #1 key to having an honest conversation successfully

For any difficult discussion, our own personal mindset is the thing you need to get hold of first to ensure that you have the honest conversation in the right way.

The mindset that’s needed in an honest conversation is one of humility. You need to be modest and willing to accept that you’re not always right, don’t always have the answers and are at least partly responsible for the issue at hand.

Humility is the thing that’s going to allow you to show vulnerability, compassion and objectivity, right through the conversation while you find a resolution to the issue.

Getting started is often the hardest part, which is why we have put together this short course to empower you to have those difficult, and sometimes awkward, conversations in the workplace. Get access here.